Sonata Vol.1: Valley of the Gods from Image Comics comes from the creative team of writers Brian Hasberlin and David Hine, artist Brian Hasberlin, colorist Geirrod Van Dyke and letterer Francis Takenaga. Collecting the first six issues, Sonata Vol.1 explores the themes of cultural differences and religion. With a stellar science-fiction backdrop, this book was a title I was very excited to read.

Sonata is a member of the Ran, a people who believe in peace and working together. Her father is the lead engineer for the Ran, making Sonata an intelligent and fierce woman. They are attempting to flee from their home planet to live on Perdita, a land that’ll be more environmentally stable for their people. Meanwhile, the Tayan’s are attempting to conquer it but deem it as a “primitive world” that they are entitled too. 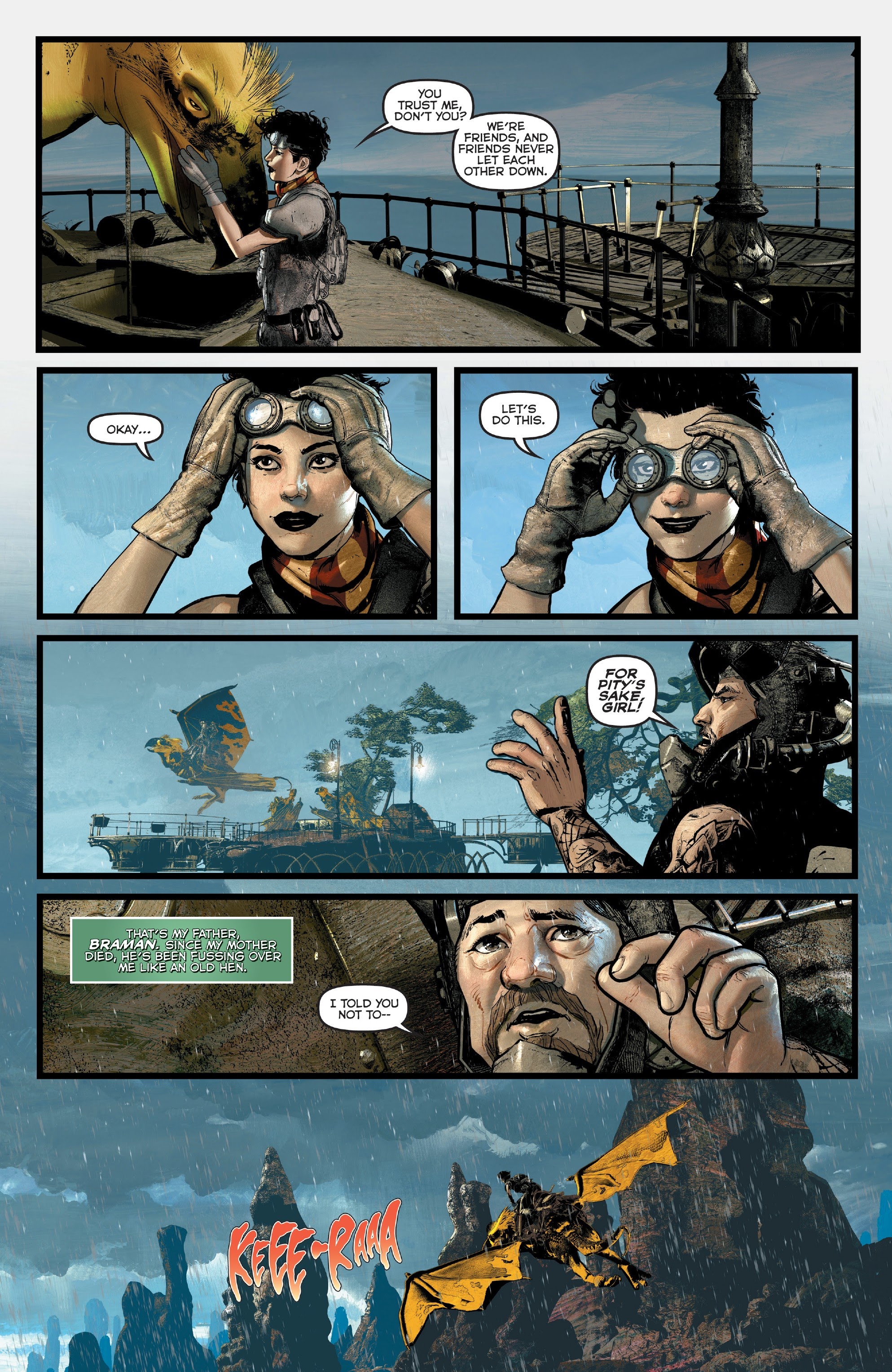 Legend states that this planet is home to the legendary Gods. Hasberlin and Hine use this mystery as a focal point for all of Sonata Vol.1. A third party called the Lumanii also enters the story. They are natives to the land and have been there for generations. The script sets up a conflict between all three parties by having the Tayan wanting to build a dam to have access to all the water. The Ran and Lumanii do not wish to use violence over access to the resource. Hasberline and Hine do a wonderful job of characterizing how the Ran represents peace and how the Tayan represents war. Takenaga on letters adds to the ease of the book. All of Sonata’s narration is green while Pau’s is orange. It is simple and effective.

The political undertones of colonization are thrown to the wayside once the fact-paced action of the Sonata Vol.1 starts to take place. The Ran chooses to denotate a bomb at the dam the Tayan has constructed. In doing so, this makes all the water from the dam to overflow and cause an earthquake. This splits up the characters. One group features Sonata, Treen (a Lumanii), and Pau (a Tayan). The other group features Sonata’s father Braman, two Lumanii’s, Pau’s father Lord Kantor, and his men.

Hasberlin and Hine use Sonata and her partners to explore the ideas of the Gods. The Lumanii, Treen, is a protector of God’s secrets and is sworn to never divulge them. Sonata puts Treen in a tricky spot since she manages to bring them into the home of the Gods. There, they discover the origin stories of the legends that were mentioned earlier in Sonata Vol.1. Meanwhile, the second group comes face to face with an awakened god which the Lumanii calls a Sleeper. The action is direct and sharp. The motion is fluid and a spectacle to read. Everything jumps off the page.

The art by Hasberlin is the best aspect of Sonata Vol.1. The inking by Van Dyke is incredibly bold when it comes to character outlines. Every background holds attention to detail and texture. Facial expressions are dynamic, enhancing the scripts. Each person’s character designs give off subtle steampunk nods while retaining an authentic feeling to the universe Hasberlin and Hine have created. The space landscape is wide and vast with Hasberlin never failing to add in as many stars, clouds, or mountains into the panels. The world with Van Dyke’s color schemes of browns, greys, and yellows are immersive.

The only critiques of the book stem from the half-way point on. The art remains magnificent throughout. However, the script falters with the addition of a romance between Sonata and Pau. It turns Sonata Vol.1 from a unique and breath-taking science-fiction book into one that suffers from its cliche Romeo and Juliet moments. The romance occurs too quickly with no definition of their relationship aside from the fact they are from two separate cultures known to hate one another.

The book rushes the inclusion of a new character important to Pau. This character adds another dynamic to the plot that would cause more conflict. The action that ensues after this feels hollow until the ending of the book. Although, the cliffhanger is enticing and intricate enough to make up for the weaker writing in the last act.

Despite its script flaws, Sonata Vol.1 Valley of the Gods is a gorgeous and interesting book. The designs of the creatures, characters, and backgrounds are superb. The characters are all likable and understandable. While the story may feel lacking in places and rushed, it provides a fast-paced charm that other science-fiction, action-adventure stories don’t.

Sonata Vol.1 Valley of the Gods is available where comics are sold.

Sonata Vol.1 Valley of the Gods

Despite its script flaws, Sonata Vol.1 Valley of the Gods is a gorgeous and interesting book. The designs of the creatures, characters, and backgrounds are superb. The characters are all likable and understandable.

Cidnya is a reviewer, podcaster (co-host of Is That A JoJo Podcast?), and YouTuber covering comics, manga, and books. Their writing is shaped by emotional depth and critical analysis.