If you’re looking for a new series to binge, look no further that Guillermo Del Toro’s masterpiece Trollhunters on Netflix. At first, you might think Trollhunters is just your other typical “chosen one” show. You’d be mistaken actually. The depth of the journey that Jim and his friends go through is extraordinary on so many various levels. The joy, the heartbreak, the humor, and insight the show takes you on with them through its 3-season run (and presumably beyond) will keep you glued to your screen. Trollhunters ranks up there for me with Avatar: The Last Airbender, The Legend of Korra and Voltron: Legendary Defender (all Studio Mir animation productions by the way) as a page-turner of a series. You can’t wait to find out what happens in the next episode. With this series and Voltron, Dreamworks animation is stepping up their game to rival, and in many cases beat, the behemoth of Disney.

The premise of the show is that trolls, in all their various cultures, live below us, and have for centuries, if not millennia. Instead of being the stereotypically ghoulish caricatures folklore made them out to be, they are magical, mostly noble beings who wish only to live in peace. The “Trollhunter” is their chosen hero from each generation (a la the Avatar from Avatar: The Last Airbender) who must protect trollkind as a whole, often protecting their society from evil trolls. The fundamental difference in this series is the new chosen Trollhunter is a human: our wonderful protagonist Jim, voiced by the late, great, Anton Yelchin. 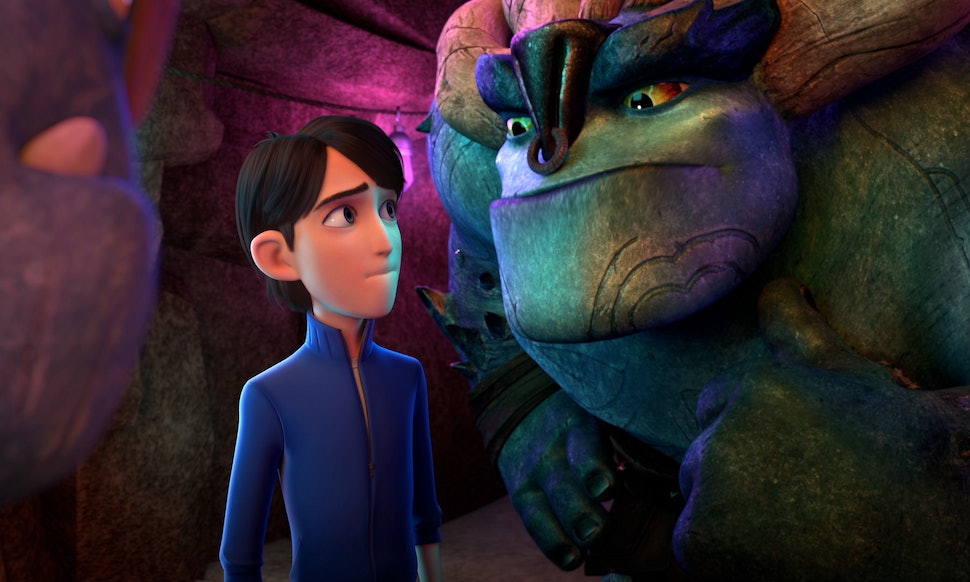 The characters are some of the richest you’ll find on tv or in any fantasy series. You consistently feel for the struggle Jim, our main hero, goes through, as the show displays all his empathetic and sympathetic qualities for audiences. The show consistently makes him relatable by portraying his balancing of real life with his Trollhunter duties. The relationships he has with his family and friends often come into conflict with his heroic journey, resulting in genuine, heartfelt moments throughout the series that will give you all the feels.

The other main and supporting characters are richly drawn out as well. Claire is a brilliant, determined, spunky co-protagonist who gets her own hero’s journey along Jim. We get great insight into her own interpersonal relationships as well and see how that comes into conflict with her own life. Additionally, she is a Latina character and gives us representation of that community we sorely lack. Jim’s best friend, Toby, while frankly annoying at first for me, grows into an amazing co-protagonist. Through his encounters with the trolls and overcoming his doubts and insecurities, he becomes an increasingly capable character you root for. The troll companions are an absolute delight.  The ancient troll Blinky acts as an advisor and loving father figure to Jim, who undergoes his own personal growth in his old age. Argh goes beyond the team muscle, to have a poignant and powerful arc about tribe and family.

Even virtually all the supporting characters have depth or the hint of it. Del Toro and the other show creators masterfully balance their vast array of characters to give you a rich storytelling experience every episode. The villains are varied and intriguing as well, with their histories tied deeply to the lore of the series. You understand all their motivations easily, and are constantly on the edge of your seat when they carry out their nefarious plans. The fact that the greatest of all voice actors Mark Hamill voices one of them is especially fantastic.

The short length of the series, only three seasons, is a huge bonus as well. I prefer shorter shows overall, as I’m always wary of over expanding a story that needs a satisfying conclusion. The third season and the series finale have some of the most satisfying conclusions I’ve ever watched on TV, with promise of story to happen elsewhere with these characters in the Tales of Arcadia universe. This short length, with the fantastic drama, comedy, thrill, action, and raw emotion of Trollhunters will keep you glued to your screen throughout. Go watch it on Netflix first chance you get.

Rating: 9.7/10 trolls.
Pros: Characters, story, design, action, length, basically everything.
Cons: That it had to end.

Swara is a data analyst and a co-host of Into the Spider-Cast and The Middle Geeks. He’s a big fan of Star Wars, Marvel, and DC. He frequently discusses politics, policy, and environmentalism as well.

REVIEW: ‘Jupiter’s Legacy’ Season 1 Is Eclipsed by Other Superhero Adaptations